skip to main | skip to sidebar

There Goes the Mother of the Year Award

Sophie loves to help out in the kitchen. She sweeps, she rearranges the Tupperware cabinet (several times a day), and if you hand her a paper towel, she drops to the floor and starts scrubbing. Sweet little Cinderella girl. Her favorite chore is unloading the dishwasher. Usually she pulls out forks and spoons one at a time and hands them over to me, but she recently discovered that she can stand on her tippy toes and plunk them into the drawer all by herself. She even grabbed a pot lid from the dishwasher and ran to the correct cabinet. Frank doesn't even know where the pot lids are stored!

Yesterday she was busy, busy, busy with silverware so I stepped away to the table to check my email on the laptop. First she brought me all the forks, one by one. Then she returned them, one by one, to the dishwasher. Then she rearranged them for a while. At least, that's what I thought she was doing. Turns out, she had really been on her tippy toes digging things out of the silverware drawer. When I stepped back into the kitchen I saw that she had loaded all of the steak knives -- blade UP -- into the dishwasher. Luckily she did not slice or dice herself in the process.

Since I have no pictures of her knife-juggling talents, I will post some pics of her tin foil sculptures. She had fun building with tin foil, then dancing with it. 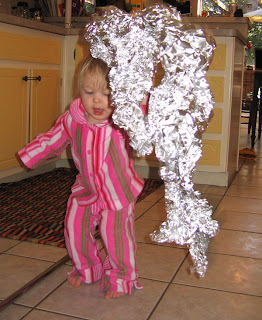 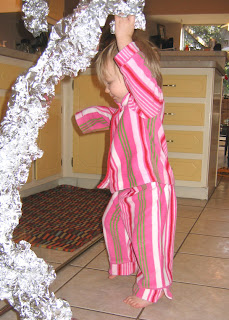 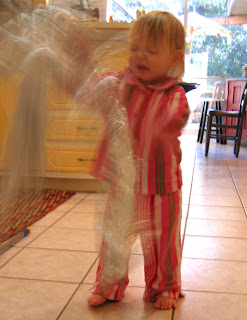 Sophie, Frank and I took a day off and drove up to Fort Worth (and Weatherford, too) to spend some time with Nana Jane before her doctor appointment and to relax out at the farm. It was supposed to be snowing, but it was a gorgeous day! We played outside with all the new doggies (there are three now, but Coco is still Sophie's fave). Here's Sophie with her Nana and then kissing GramKat bye-bye. By the way, thank you to ALL our family and friends who have sent emails and well wishes. We know you are praying for my mom, and it means so much to us. 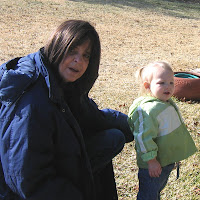 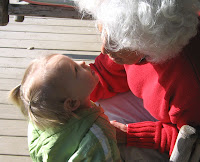 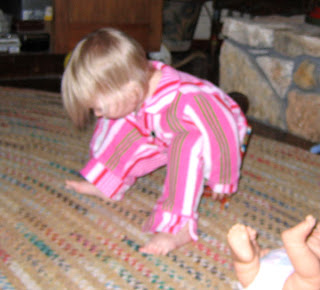 At GramKat's house, Sophie tried out all of the chairs looking for just the right one. 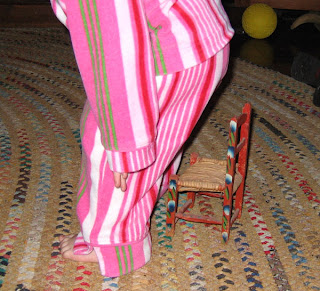 Ooof. I feel the same way when I try on my pre-pregnancy jeans, kid. No matter. I like big butts and I cannot lie. 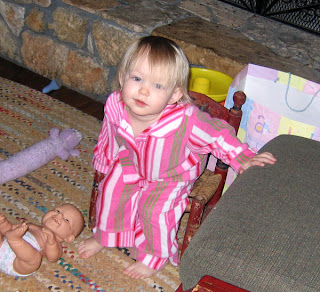 Ahhhh...this one is juuuuuuust right! 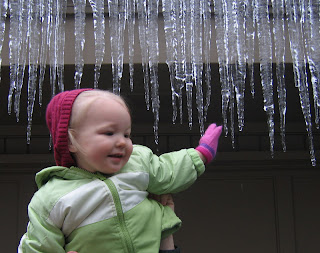 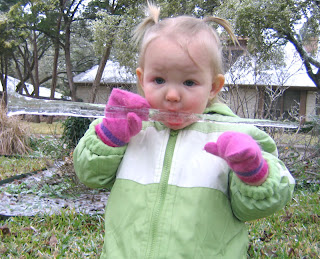 How'd Sophie get a glass eye? Well, there was this ice storm back in aught 7, see...
So we had another Ice Day on Wednesday. (After a rainy Saturday, a freezing cold Sunday, a lazy MLK Day and an icy Tuesday.) I'm not sure I could be a good stay-at-home mom. I was running out of distractions by late Monday afternoon. Going outside was a great relief for everyone. We de-iced the cars, crunched around on the lawn, ate huge icicles, and finally bundled up for a walk around the block. I wasn't exactly looking forward to going to work today (two hour delay on Thursday, but we're back in school), but I wasn't looking forward to another ice day, either. I was so happy to see Nini and Laney and Maggie today that I almost peed my pants. I'm sure Sophie peed, too.
Posted by Stacy at 5:46 PM 2 comments:

Our Little Kitten Lost Her Mitten

Enjoy these short films of "Sophie's Snow Day." The first is a snow dance, the second is Sophie's weather commentary: 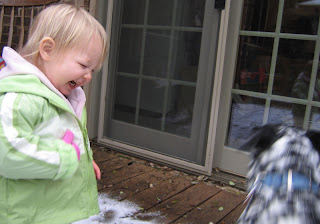 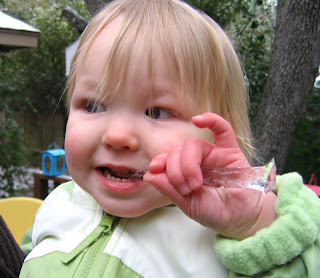 These are pics from Day 1 of "Ice Storm 2007." Our deck collected a bit of ice and a tiny bit of snow -- real snow! Sophie had a great time sliding around, eating icicles, and playing with a very wound up Callie Dog.
Posted by Stacy at 11:54 AM No comments:

No babies were hurt while taking this photo 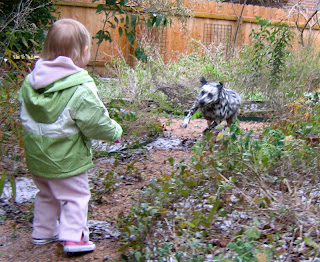 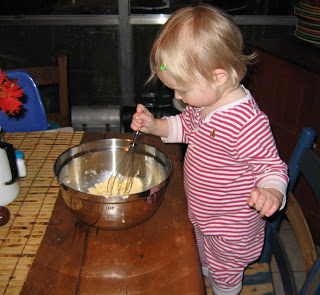 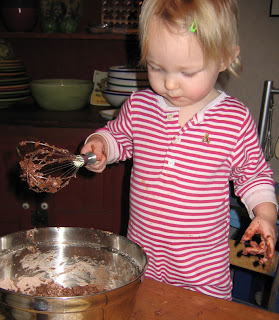 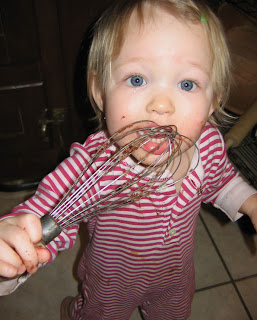 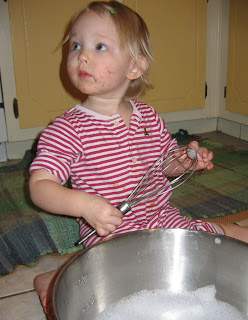 Time to learn how to bake! (We didn't bake soap cookies. The final shot is of the chef cleaning up her kitchen tools.) Oh yeah, no comments about the fact that she is in her pajamas at 3 p.m. Like I said...it was a rainy day. We were ALL in our jammies all afternoon.
Posted by Stacy at 4:16 PM 1 comment:

Why I Love Frank Who Loves Sophie

I captured a bit of post-bathtime singing with the video part of our camera (explanation of why it's so fuzzy) Click on the link below or on the play button. 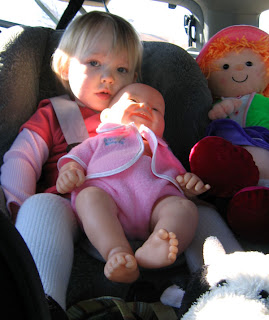 Sophie's a nurturer. She love, love, looooooooves baby dolls. In a bucket of bathtub toys at Mamaw's house, Sophie fished out a little naked baby and carried it around the entire week we were there. We watched, amazed, as she wrapped it up in one of her diapers without any modeling or nudging from us. Then, when we got back to Texas, GramKat brought out a doll (pictured above...we call it CB, for "Creepy Baby") for Sophie to push around in her new doll buggy that Nana Jane gave her for Christmas. Even though the doll makes most adults cringe (I think it's the painted on teeth), Sophie kisses and hugs and pats her baby. She doesn't care that Coco the dog ate one its fingers. She doesn't care that it has a bit of red paint on one of its creepily large boobies. She doesn't care that its eyes...and its snarl...follows you around the room. She just loves with abandon and without judgment. The other night I watched from her doorway as she stood on her tippy toes to get a wipe, pretended to wipe CB's bottom, then "flushed" a perfectly good diaper down the Diaper Champ tube. And she tickles CB's piggies. And CB plays along, with perpetually curled toes.

We've reached that part of her life when things are changing on a DAILY basis. She has new words, new tricks, new likes/dislikes. I'll try to keep the blog more updated! 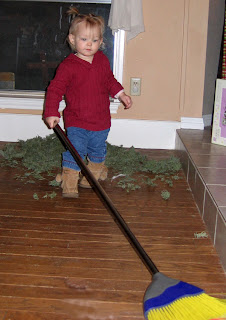 During our Christmas clean-up efforts, Sophie grabbed a broom and started to help out. This picture is subtitled: Why We're Buying a Plastic Tree Next Year. Can you believe all those needles?!? On a Sophie note, helping out is one of her new favorite things. She likes to help unload the dishwasher, help feed Callie (one dogfood kernel at a time), help put away toys (and then help spread them all out because things looked more festive that way). I sort of wish Santa had brought her a tiny broom, but she already got a kitchen and grocery cart from Santa and a doll buggy from Nana -- I didn't want to go over the top with domestic stereotypes. Of course, she received stacking toys (future architect?), a shape-sorter (future engineer?), a doll with one finger chewed off by my grandmother's dog Coco (future plastic surgeon?) and a sparkly tutu (future drag queen?) There's no telling what amazing things this little Sophie will be inspired to do.


I'm a bit tardy in posting our Christmas vacation pics because we've had some trouble with the main webpage software. If I can get it up and working, you can get a glimpse of our holiday by visiting www.frankandstacy.net. If it doesn't work, well...Christmas is over. Let's all move on.
Posted by Stacy at 9:50 PM No comments: 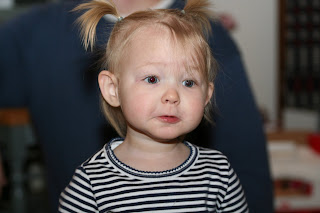 I like Sophie's expression in this picture. It's the perfect blend of "Doh!" and "Yee-ikes" and "Oh, no you di-in't." And it's the closest thing I could find to match my expression tonight, after looking at two completely different pre-schools earlier today.

The first, Children's Courtyard, is corporate chain childcare at its best. There are slick and shiny brochures, plexiglass "fishbowl" rooms that you can peer into but which seem hermetically sealed, and the building, itself, looks brick-for-brick like all the other CC's in the world. A camera is mounted in each classroom so you can "check in" on your kid via the web (yep...I'll have it up on my computer all day and will probably burst into tears whenever I see some kid grab a toy away from Sophie). The place is clean and new and bright and was filled with books and toys and smiling teachers. When we spied on the classroom that Sophie would be in, we witnessed six well-behaved kids sitting around a table politely sharing a snack together. And there was a guinea pig. I like guinea pigs. So what's not to like? I just don't know...it seemed Big Brothery or Big Boxy or something. Like you would find a Children's Courtyard nestled between a Starbucks and an Old Navy and a Linens & Things in any neighborhood in America. Of course, who doesn't need Things now and again?

From there, we headed to Habibi's Hutch, the South Austin hippie alternative to daycare. When we got there all of the kids...ALL of the kids (mixed together, not in little age group pods) were playing in the back yard in this very Garden of Eden meets Lord of the Flies setting. Many of the kids were barefoot (it was pretty crisp today -- not freezing, mind you, but the teachers were all wearing jackets), and at least two of the kids were running around only in their undies. A parent was asking if her acupuncturist friend could be a substitute teacher. The director seemed interested, said he'd need to "untrain" her if she had worked in other childcare settings (but never mentioned a background check). The house was sort of beat up and dark, but there were art easels set up. I like art easels. And outside, the kids were howling and screaming...in a good way. Rock music was blaring and everyone seemed to be having a wild old time. Sophie jumped right into the swing of things by eating dirt and throwing rocks. But no one stopped her, because she was expressing herself. All of the teachers knew all of the kids, and when one of them got ready to leave, he hoisted his bike over the fence, picked up a megaphone and yelled out a good-bye, and ALL of the kids stopped what they were doing, turned towards him, and screamed, "Bye, Mike!" And then they resumed mud-smearing and such. When we left, Frank said, "For a minute there, I was embarrassed that Sophie was dressed so cute today." What?! Like we've already sold out to the man or something? Like Sophie isn't ragamuffiny enough? It might just be too much pressure to be so laid back.

So here we are, not one step closer to knowing what we will do next year. I think Sophie would be LOVED at Habibi's Hutch. I think she would be really well CARED FOR at Children's Courtyard. As strange as this sounds, maybe she needs more than love. As wonderful as it was to see the kids running around wild, maybe they need a little bit of structure? At the HH, a kid gets to be a kid, but they don't necessarily work on any kindergarten readiness skills. At the CC, kids get Spanish and dance class and go through specific curriculum units. But Sophie didn't babble and cackle like she did at Habibi's. We need a combination school. Does it exist? Could we send her to Habibi's just one day a week and do the calmer, yuppier school on the other days? We're looking at Montessori schools tomorrow. If you've got ANY insight, leave us some comments.