skip to main | skip to sidebar

What's in a name?

And the conversation continued as above with us saying names and the little parrot repeating: Nini, Maggie, Adam, Kate, Jason, Lucy (which sounds like Lulu), Nana, Jeff, Jordan (more like JoJo), Ashley, Grandma Kate (she said Gra..., then spit out "Baga!"), Paw-paw (this is Grandpa Jerry), Lupita (sounds like Pitapita), Taz, Vanessa (Baness), Max, Madeline (Madada), Mamaw, Grandad (Dad-dad), Rob (Wob), Laura and Lauren, then a scrunched up face at the name Hazen, then finally back to...

of "Febreezing" my child before we went to have dinner with Maggie and Adam. She had been at the park with Frank and smelled like a sweaty little boy. What? I covered her eyes before I sprayed the Febreeze and told her, "turn, turn." And then she smelled like crisp linen.
Posted by Stacy at 6:54 PM 6 comments:

Be sweet. That's what my mom always said when she got off the phone with me. And that was also the defining quality of my mother -- sweetness. Jane Ellan Lively, my mother and Sophie's grandmother, passed away on Wednesday morning after battling lung cancer (then brain cancer, then radio necrosis, then a return of cancer in her spinal fluid) for many months. She was diagnosed when Sophie was only 25 days old. My brothers and I were there with her, and we told her it was okay to go. It seems so fast, I know. She was doing so well, and now she's gone. But I saw my mother in pain for one day, and that was long enough. It is such a blessing that she is no longer in pain and that all of our memories of her are of the vibrant, funny, sweet person that she was. There are so many amazing stories to tell about her and about the time we spent together this week remembering her. This is my favorite one from this week, and this is what brings some peace to my heart right now:

My mother always wanted a roomful of balloons. My older brother, Jeff, coordinated a special project for his boys on the day of the funeral. Back at the farm, the boys (and Jordan and Ashley and Claudia and other friends) prepared a gigantic bunch of balloons and tied a card with my mom's name to the strings. We counted down and released the balloons and watched them float away over the farm and disappear from our sight. About an hour later, my younger brother Jordan was down at the pond with his friends and I heard his girlfriend yell up the hill, "Stacy, look at the rainbow!" I searched the skies for an arch, then Ashley yelled, "right above the house!" And there it was. A small, horizontal rainbow stretching right over the farm. Jeff saw it, and my sister-in-law Claudia yelled for Joel to come look. As soon as we had all seen it, the rainbow faded away and disappeared. I know Momma was telling Jeff "thank you for the balloons." I know she is still here, all around me. I know that, even though Sophie will not remember her Nana Jane, I have the awesome responsibility of telling her all the stories and teaching her all the lessons that my mother taught me. 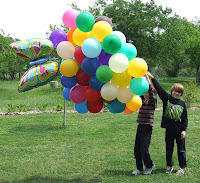 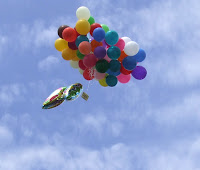 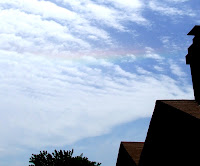 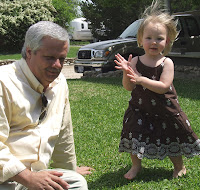 Sophie and her Grandpa Joel.

Sophie spends every weekday with her nanny, Nini, and her Laney-friend. Next year, Sophie's going to school (not sure where yet, but "school" it is, because Momma has to go back to work fulltime). We're excited about the social interactions, the "curriculum" for two-year-olds, the increased opportunity for language development, the construction paper artwork that will be coming home to decorate our fridge, and so on. But the closer it gets, the sadder I am about Sophie not spending every day with Nini, who loves her, and Laney, who is her twin-friend. This is the best scenario I could have imagined for her, and I'm a bit panicky about change of any kind.

Laney and Sophie have sooo much fun (and they fight, too, especially on Mondays when they've spent the weekend NOT sharing toys with anyone). Here are some pics and videos of some of their adventures.

Click on the picture below to see our trip to the zoo: 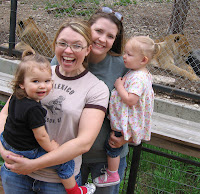 Click on the link below to see their first adventure with Play-doh:

Forget the bonnet; where's the parka?

It was a low-key Easter, but we kept the spirit alive. Monsoon rains cancelled our neighborhood egg hunt, the same soggy weather pushed our church festival inside to the gym, and 40 degree weather on Easter morning meant we were searching for tights and a sweater to match Sophie's very springy dress. Still, she had a blast. Her egg-hunting tactic was to hang back as the rest of the kids raced ahead, then she collected all the eggs that they missed as they zoomed by. She was intrigued by the giant pink bunny (as was I), and gave him a kiss after we took her picture on his lap.

On Easter morning, she struggled a bit in church when it was time to put her daisy on the flowering cross. She thought it was a better idea to snatch a few more flowers for herself, but we finally got the flower attached without too noticeable a fit. Later, during the closing song, she danced right up the aisle to the cross to smell the flowers. The congregation thinks that's really cute when you're one. We'll see how many smiles and oooh's and ahhh's we get when she's eight years old and still scrambling on stage to be next to Daddy. (Actually, the thought of that makes me smile.)

The Easter Bunny visited our house while Sophie took her afternoon nap, so she woke up to an egg hunt this afternoon. By the way, the Easter Bunny went to Target yesterday and ALL of the plastic eggs and ALL of the chocolate bunnies were sold out, so the EB stayed up late boiling and dying eggs with food coloring. On the way home, Daddy stopped at Walgreens to buy a video tape and (Easter miracle!), found eggs and a bunny. Sophie gently dropped the plastic eggs into her basket, but popped every hard-boiled egg into her mouth (turning her lips and tongue all kinds of colors), then slammed the eggs onto the floor. I thought we might eat hard-boiled eggs all week, but it looks like egg salad sandwiches are in our very near future. While Frank and I tried to sort the plastic eggs from the hard-boiled, Sophie played with her chocolate bunny, making it hop, hop, hop. When we finished sorting eggs, we found a chocolate-covered baby. She ate right through the tin foil and devoured one of bunny's ears. Happy Easter, everybody! 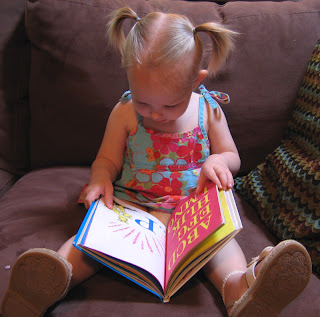 Sophie's working on her alphabet. One of her favorite books right now is the Dr. Seuss A,B,C book, but we usually stop at the Fiffer-feffer-feff page and then she flips ahead until she gets to the P page (which has cool colors but inane words) and the ZZZZZ! (which has cool swirlies around the Zizzer-zazzer-zazz).
Click here (or on the picture) to see SOPHIE READING HER A-B-B-B's.

Smoochin' Under the Bleachers

Hilarious? Horrifying? Yes, both.
Posted by Stacy at 6:07 PM No comments: 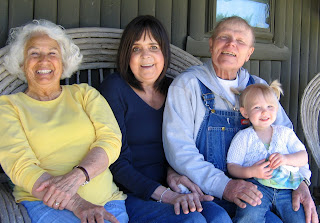 Funkytown is Fort Worth. According to my little brother's tattoo, anyway. This weekend it was a bit more like Freakytown, with a tornado touching down near my Gram's house in Weatherford (and she said, "C'mon out tonight...do you think I want to die alone?"), flash floods in my mom and stepdad's cul-de-sac that came dangerously close to the house, and then...the next morning...not a cloud in the sky. That's Texas weather for you.
So our weekend consisted of a parade through my mom's work (everyone in the building seemed to know Sophie already, from the shrine in my mom's office), then lunch with Mom and my brother Jeff, then a haircut for me at Claudia's salon, then over to Mom's house where we got stranded for a few hours while the streets flooded, then out to the farm at 10 p.m. (so Gram wouldn't be the only one in tornado alley). Sophie loved the fast-paced day and decided to stay up most of the night partying. I moved her from the pack-and-play to the big bed with us and, right after she'd drifted off to sleep, THUD. She rolled right out of the bed. She was fine (I was more upset than she was), but began crying for TOW (which is her new way of saying Cow), whom we had neglectfully and woefully left at home. My nephew Michael had sweetly donated a black and white Snoopy-esque animal as a substitute, which we put in her arms as we tried to tuck her back in to the pack-and-play. She promptly rejected it and began thrashing it against the sides of the playpen. And so she came back into the bed and slept while I groggily guarded her the rest of the night.
The next day was beautiful -- she played dress-up with Gram, read stories to Nana Jane, showed off her beebo (belly button) to Grandpa Jud, and played a little croquet in the yard. She trudged along with us at the First Monday flea market until Gram found a $7 stroller at one of the booths and then she said, "Ride! Ride!" We had "first lunch" at the farm because we had been too late the night before to enjoy Gram's stroganoff; we ate "second lunch" at Zeke's with my brother Jordan and his girlfriend Ashley because my mom has been craving fried fish. All in all, it was a fantastic whirlwind trip to Funkytown. 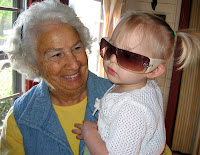 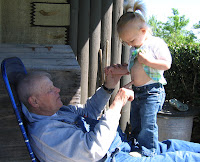 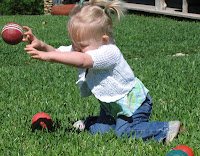 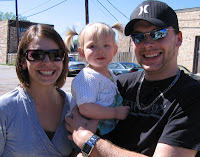